In the mid-1800s, Canadians brought the first Clydesdales to the United States where the draft horses resumed their existence on farms. Today, the Clydesdales are used primarily in shows of entertainment or for breeding. In America, they are known as the horses in the old school Budweiser commercials; prancing elegantly through the snow pulling a carriage of beer. 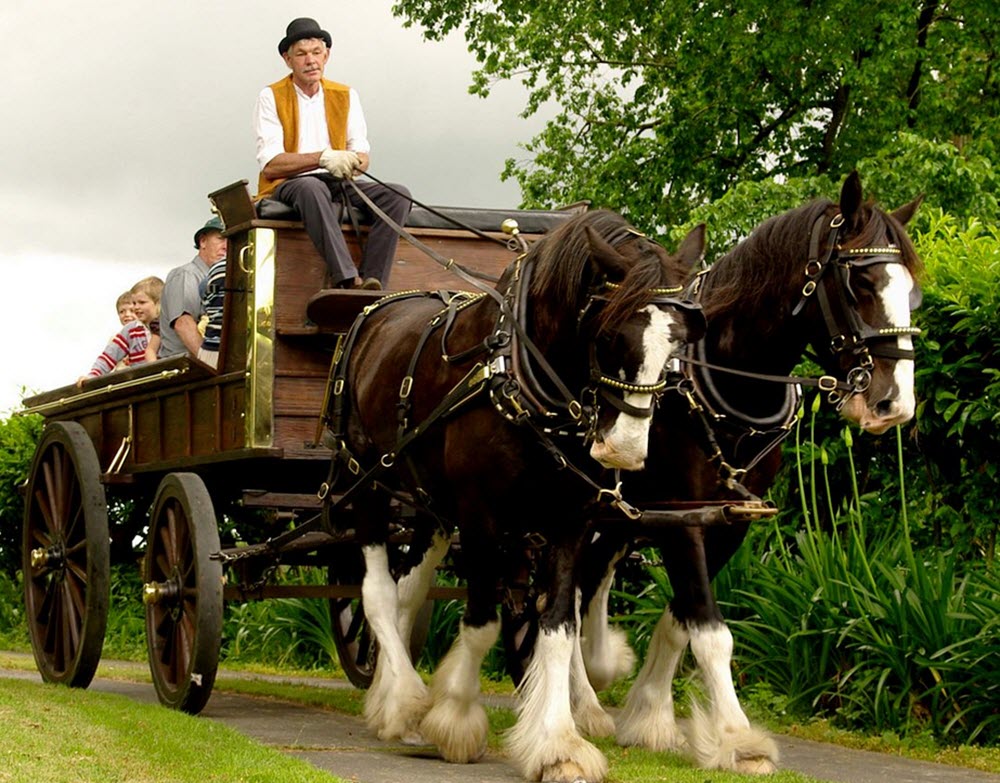 The most common Clydesdale colors are a deep mahogany brown, though some may be gray, black, or roan. This breed often feature white markings on the face and legs. Some specimens will also feature white spots on their body. The Clydesdale is an immensely strong, barrel- chested horse. The Clydesdale horse was primarily bred for heavy work hauling or for doing basic farm work.

Bigger legs and foot/hooves enable these animals to be swift and strong runners. Their bodies have a number of adaptations that allow them to support their large bodies.  Example of such adaptations includes that the tibia and fibula are fused. So is the radius and ulna

The head has more of an elongated muzzle, providing space for the teeth for extra teeth. A Clydesdale’s profile is just slightly convex; or in other terms called a (“Roman” nose), compared to the more concave profiles of other breeds.

Both wild and domesticated horses are very social animals and live in herds. Clydesdales tend to be quiet and docile. When in groups, they rub and nuzzle one another.

They are known to be the most expressive Horses with large personalities. Male horses exhibit the flehmen reaction in response to the scent of a female’s urine. This reaction is characterized by a curling of the upper lip, and males exhibit it before breeding.
A young male will often take a submissive posture, with its head level to the body and its mouth open, when near an adult male. Clydesdale Stallions will bare their teeth as a threat display.

Clydesdale’s consume approximately twenty to twenty five quarts of feed, 40 to 50 lb. of hay, and around thirty or more gallons of water every day. It is very important that working horses get enough foods and water every day.

Clydesdales live into their late teens or early twenties.

This breed was extensively used for pulling heavy loads in rural, industrial and urban settings, their common use extending into the 1960s when they were a still a familiar sight pulling the carts of milk and vegetable vendors. They have been a regular work horse for over two hundred fifty years or more.

The estimated United States Clydesdale population is between three thousand and four thousand. Approximately six hundred Clydesdales are registered in the United States each year.