The Percheron Horse came about at the end of the First World War. Many farmers serving with the British Forces in France became well-known with the Percheron and impressed with its docility, activity and power and ability to work both in mud and on hard surfaces.

The Percheron was imported to England as a general workhorse and large numbers were to be seen working through out the arable counties of East Anglia and the Fens in particular and they quickly spread to other parts of the country. 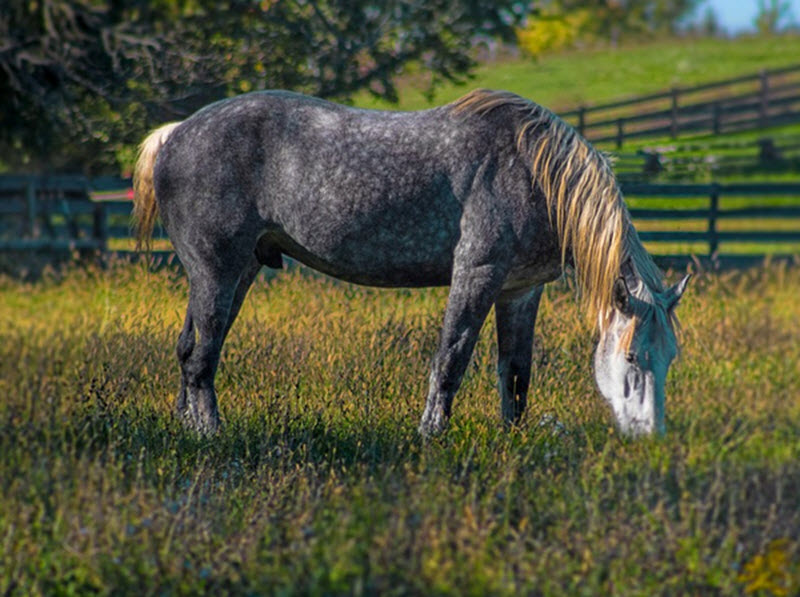 The Percheron is a Draft Horse or Heavy horse. The Draft horse is also known as the Draught Horse or Dray Horse. ‘Dray’ is a word derived from the Anglo-Saxon term for ‘to haul’ or ‘to draw’.

Draft horses are large and hardy, much heavier and broader than the light horses. The breeds in this horse class are referred to as cold blood breeds, in reference to their quiet and calm temperament.

Although the exact history of this breed is not known, the ancestors of the modern Percheron came from the horse friendly rolling green pastures of Le Perche, southwest of Paris. Horses here grew large and hardy as a consequence of the mild temperatures, lush pastures and good nutrition. In the early middle ages, Arab and Andalusian stallions were brought into the area in order to breed with the native mares.

The breed standard states that the Percheron head and neck are typical of the most beautiful draft horse character. Good Percherons have a large and full prominent eye, a broad and full forehead, and straight face. His strong jaw and refined ears attractively set and carried with animation, which suggests his Arabian ancestry. Stallions should have ruggedness about the head and mares should have a feminine look.
Percherons range in height from 15 to 19 hands high, most are between 16 and 17 hands high. They can weigh up to 2600 pounds with the average around 1900. The lower thighs are heavily muscled to give the horse enormous pulling power, making them cost-effective movers with clean action and good balance.

They are wide and deep through the chest with a large heart girth and well sprung ribs. The croup is level, tying into a large round hip. They lack the intense feathering on the fetlocks seen in many other draft breeds.

Most Percherons are black or grey, but sorrels, bays, roans, and other colors are also seen. Many Percherons have white markings on the head and feet, but too much white is undesirable.

Percherons are big eaters, easily eating 30 pounds of hay and over 5 pounds of grain and other supplements per day.
The Percheron is an easy keeper, and not predominantly prone to health problems. Good grooming is essential, however, as their coats get heavy in cold climates, and the hair around their ankles can attract bacteria in the soil, making them susceptible to scratches or pododermititis. Because of their size, the Percheron needs a very large stall if kept inside. They do very well in pastures, or on dry lot.

Percherons are highly versatile animals. They are adaptable to most situations and types of work. They perform well under saddle, and many have been known to make successful hunters or jumpers. They are often crossed with lighter breeds to make an excellent and competitive sport horse. Where they excel, however, is in driving. They have the strength to pull heavy loads and the graceful style to pull a fine carriage. They are still used regularly in small logging operations.