The Konik pony name derives from the Polish word Konik, which means ‘little horse’ and first appeared in Poland. It has evolved from the  wild Tarpan found in Eastern European. 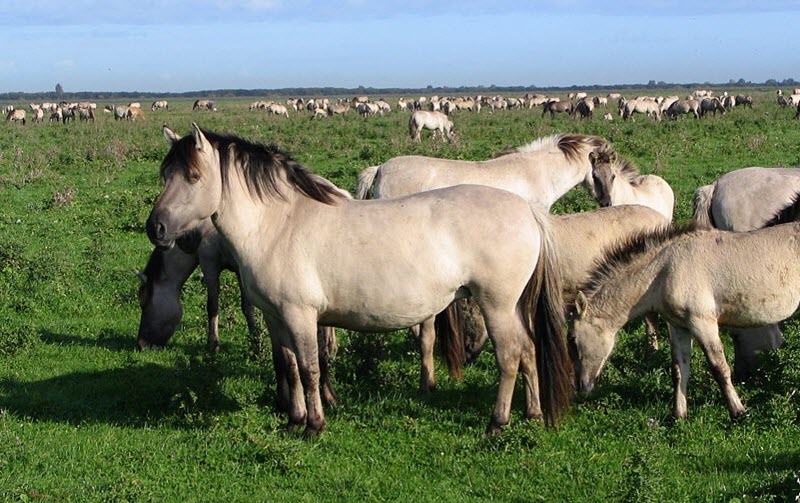 This breed is native to Poland and appeared in the first half of the 18th century. The breed was used in Poland until the turn of the 19th century when the Konik horse became less suitable for the agricultural needs. Newer agricultural needs called for a more robust animal. The Konik was not able to compete with the larger draft breeds of Western Europe. As a result the horse became less popular.

The breed persevered into the 20th centuries and the Polish people have long had a special place in their hearths for the Konik. Preservation was started in 1954 by the Polish Academy of Science to protect the Konik breed, and there are several National Stud farms where Konik animals are bred in Poland.

Koniks resemble the now extinct Tarpan horses, often considered the original European forest horses. Koniks reach a height of about 13 hands. Koniks are solidly built with a deep chest and a short neck that tie in low at the shoulder. They weigh anywhere from 770lbs. to 880lbs.

They have grey coloring, two tone manes and zebra stripes on the front legs. They are hardy horses that are very well suited to be used in habitat management schemes as they have thick winter coats, hooves that don’t require trimming.   They are especially suitable for keeping wetlands open because the breed does well in Marshy areas.

They have a reserved and docile disposition, and are considered to be a very gentle in nature breed. The Konik most commonly has a blue dun coat, often colloquially called ‘mouse-gray’. The Konik horse have well proportioned bodies with deep chests. The koniks small stature and excellent temperament make them a good choice for anyone looking for a children’s mount.

Quiet, calm, and gentle; very intelligent, loyal, obedient, and bonds with its other horses easily.

The Konik horse has an average lifespan of 25-30 years.

They eat a fair amount of hay, grass, and oats with sufficient quantity of water should be provided; the right balance of dietary fibers and concentrates is important with this breed of horse.

Most Koniks live in semi feral herds in Polish nature reserves and parks, and are maintained as part of breeding herds.  Few are employed as riding or driving horses, though Koniks are often used in research trials, particularly those documenting behavior.  The Polish Konik population is estimated to be less than one thousand.

The Konik horses are mainly bred in Poland, and private breeding centers at Popielno, Poland. They have also been successfully introduced into the nature reserves in the Netherlands, UK, Germany, France, and Belgium.

There are six breeds of stallions from which the Konik Polski has been derived. They are distinguished into the following classes: the Liliput lineage, Wicek lineage, Myszak lineage, Goraj lineage, Glejt I lineage, and Chochlik lineage.