Friesians get their name from the land where they originated, in Friesland, The Netherlands. Originating in the Netherlands and combining the better qualities of primitive forest horses and possibly some Andalusian blood, Friesians are prized for their strength, grace, and athleticism.

With their jet-black coats, flowing manes, and high-stepping gaits, Friesian horses have become favorites for those who want to ride or a spectacular, eye catching horse. 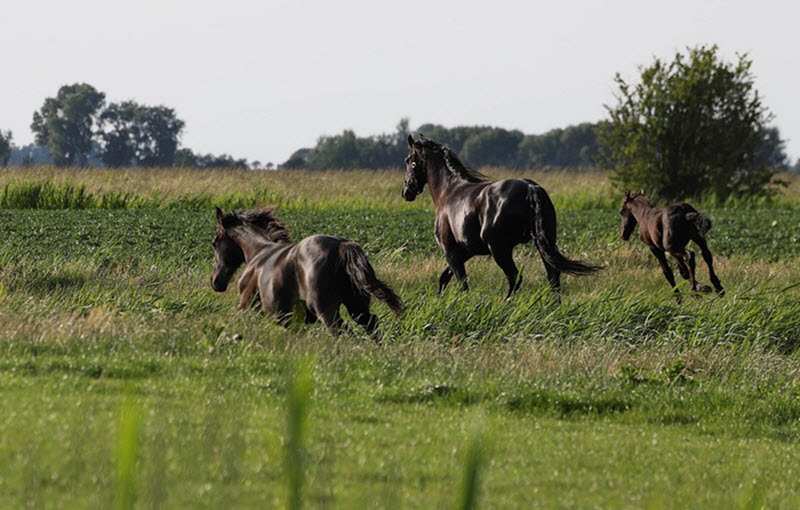 Friesian Horses are pure black horses with a full flowing mane and tail; and have a flashy or showy movement. They have feathered feet typical of a draft breed, but they are built like a lighter riding horse. Friesians average between 15-17 hands high. While Friesians are most commonly known to be pure black in color, in some rare cases, you may find chestnut Friesians. Chestnut is not a favored color.

Registries consider most white markings as proof that the horse is not a pure bred Friesian. The only marking allowed for registered Friesians is a small white star on the forehead.

These horses feature a body that is muscular and compact. They have a fine head with an arched and thick neck. And you can find two conformation types in this breed, which are the modern sport type and the classic heavy type.

The general temperament of the Friesian horse is very good. The horse has to be able to be handled by all family members, so an awkward temperament is not at all desirable.

Friesians can be pushy until they are clear on your boundaries, they are able to read our level of confidence with them; and when they perceive we are a pushover, they will in turn push on you.

A Roman historian, Tacitus, noted the breed’s existence in 55-120 AD and referred to them as a very powerful and versatile horse. Friesian horses were also a very popular mount for German and Friesian knights in the Crusades. The Friesian breed also influenced many newer breeds that had started to emerge. Despite this, Friesians began to decline in numbers in the early 20th century as horse power was being replaced by machinery for agricultural work.

Friesians were brought to North America by the Dutch in the 1600s, when the Dutch had control of New Amsterdam, now known as New York. Friesians, sometimes called “Dutch trotters” were brought to America to help develop the bare lands for agricultural use.

The Friesians strength and willingness makes them suitable for use as Workhorses. Their good looks and proud bearing makes them excellent for Carriage and harness riding. Their agility and temperament provide great dressage and riding Horses. Friesians are not often used for jumping due to their heavy stature.

Friesians take longer to develop than most Horses, due to their larger bone structure. Most Friesians are not fully developed until they reach the ages of four to six years. It is advisable to wait until your horse has reached its full growth and development before asking for too much work.

Weakened immune systems have been blamed for the higher occurrence of some problems of these horses that do not show up as often in other breeds.

Dwarfism produces Friesians foals with severely stunted leg growth, though their heads and bodies approach normal size. These individuals also show hyper flexion of the fetlocks and long, narrow hooves. In the past, dwarf Friesian mares were often used as broodmares. This practice is no longer allowed if an animal is to be registered, but the genes for dwarfism have become widespread.

Many Friesians suffer from chronic dermatitis that causes thickened and ulcerated skin on the pasterns. The lesions are often unresponsive to treatment. Though other draft breeds also have this problem