The name Mustang is derived from the Spanish word ‘mustengo’, meaning ‘ownerless beast’ or ‘stray horse’. Mustang horses are also called wild horses because of their reckless nature. The word feral suits them even better, which means wild and menacing.

Mustang horses are known to live in the enormous terrains of North America in large herds, to protect themselves from predators like wolves, coyotes, and other large predators. These horses at one point of time dwelt in millions over the US terrain; however, today their numbers have been reduced to thousands.

Horses were brought to North America hundreds of years ago. The wild horses we see today are descendants of horses that escaped or were left behind. Mustangs are wild horses.

What do Mustangs Eat?

Mustang wild horses eat grass and other plants. They drink water from seeps, springs, streams, or lakes. Adults eat about five to six pounds of plant food each day.

Description of the Mustang

The colors and markings of the Mustang Horse are many due to the mixture of so many different breeds but include spotted, roan, solid black, chestnut, bay, palomino, buckskin, dun, silver dapple, pinto. 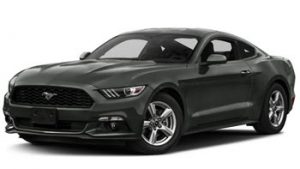 These horses are medium build horses, with the average size being about 14 hands. Sizes in mustang horses may vary from 13 to 16 hands.  The weight is proportional to their height, with anywhere between 600 to 1200 pounds. In the wild, Mustangs have a lifetime of about fifteen to twenty years, while domesticated Mustangs can live way up to twenty five to thirty years.

The mustang has inspired a lot of people to name their products after the horse.  The most famous such product is the Ford Mustang but there is a large number of other products that also been named after a horse including a Swedish razor (English Version).

Range of the Mustang

The wild Mustang is able to travel over twenty miles during the average day, even over rough terrain, thanks to the roughness of its hoof. They are a uniquely hard hoof compared to other horse breeds, which can make it somewhat difficult to trim hooves for those who own this horse. The benefit here, of course, is that Mustangs are able to adapt to numerous environments, and not be at a greater risk of experiencing an injury or health issue.

In order for a person to own a Mustang that has been captured and tamed by the US Government, they must show that they have the ability to properly care for the horse in some way. Since 2015, the adoption fee for a Mustang has been just one hundred and twenty five dollars.

Public adoption events are held on a semi-regular basis whenever it has been determined that population levels are too high. To qualify for an adoption, you must be 18 years old, have a pasture and stall available, and an open stock trailer is required for transport.
The BLM requires a professional review of the living conditions of the horse after one year of ownership, to determine its health and happiness. This assessment can be performed by a veterinarian, a professional trainer, or another recognized horse professional.